Menu
Your Cart
20% OFF on all products Shop now

THE UNSUNG LABOUR OF MIGRANT

has been a difficult may with the haunting image of chapatis scattered on railway tracks.The pictures have been doing the rounds on social media since a goods train mowed down 16 migrants. The migrant crisis has come on the back of the lockdown—almost like a double tragedy in which millions of migrant workers across India found themselves without jobs, without a roof above their head and as the days progressed even without food.

Undoubtedly it is food that has obsessed people since the lockdown began. People have been buying more, stocking up more, cooking more. Even those who thought sharing food pictures on Instagram was too millennial a thing to do are doing it. I too have been cooking. Cooking requires huge amounts of artistry. Think about it. Which other process of creation allows you to immerse yourself in it so completely. Use all your senses. As you touch, see, hear, smell and feel your way through your work. And then later you consume your work, internalizing it entirely unlike anything else created by you.

It was because of my affinity for food and the mask of gloom enveloping us all at the moment inwhich I came across the ‘roti works’ of Ranjeet Singh. A native of Jharkhand-Bihar Ranjeet’s work caused me to look at the humble chapati in a new light. Not as a piece of cooking that hasn’t changed in the millennia it has been arriving on our thalis. The roti is perhaps the only food that is cooked directly on fire—from the coal chulhas in the villages to the gas stoves of the city. It is a basic source of carb across much of the Indian subcontinent. It is simple yet elegant in all that it manages to convey about life and the station in life one occupies. The poor man’s salt and roti to the rich man’s ghee-smeared roti both speak of two distinct realities. It even harks back to the memories of the Sepoy Mutiny of 1857 when chapatis attained a unique symbolic power giving East India Company officials many sleepless nights.

So when I came across the images of these works by Ranjeet I was struck by theheart-breaking pathos that went in their making. And the chilling resonance they had with the migrant crisis of the present. Ranjeet is an artist who has for a long time dwelt on the struggles of India’s daily-wage labourers such as those in his home state of Jharkhand who work in the coal mines there or the children who work on the streets. Ranjit’s work draws from hundreds of years of labour practice that has bordered on slavery and which shockingly continues in the same vein. 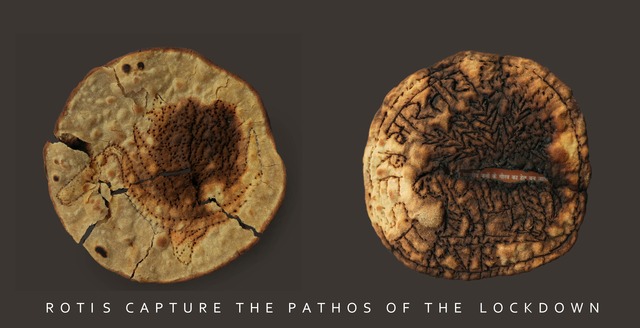 A truth that comes out from this realization is that all our economic progress is nothing without these huge numbers of nowhere people who work in the silence and obscurity of our cities. And that without them the wheels of progress would come to a grinding halt. The round rotis also resemble coins—or maybe a sort of barter currency—that could take care of the needs of millions who have been walking endless kilometres to reach home. Through his works Ranjeet takes us into the lives of the millions of workers who have walked and who continue to walk on the same polished highways that they’ve built. 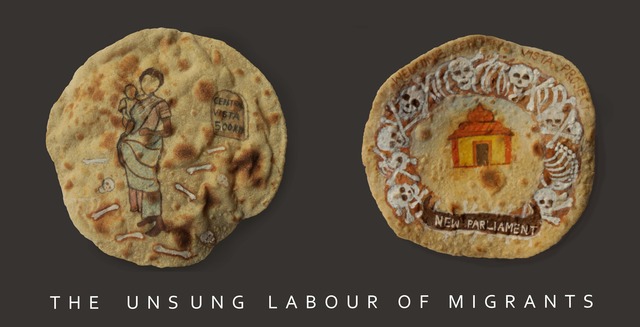 In these times of extreme economic distress and the looming threat of a pandemic going out of hand the lives of people who have a hand-to-mouth existence even in the best of times needs to be looked at through the artist’s prism. It is a reality that has perhaps caught us unawares. It has also left us staring at multiple uncertainties the likes of which most of us have been fortunate enough to not know. And surprisingly it is the walking migrant who is showing us the way through this Godzilla of a crisis with his steely resolve to flatten the curve of his pathos. 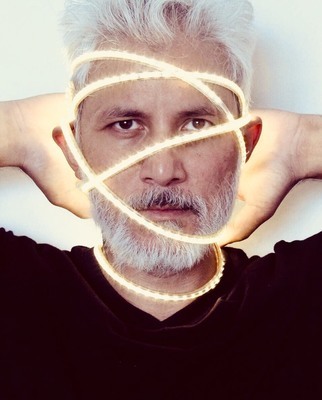 Dhiraj Singh is a well-known journalist, writer, TV personality and artist who has shown his abstract paintings and X-Ray works in India and abroad. He is also a co-founder of Hunar TV, a web channel for the arts. More about him can be found at www.dhirajsingh.co.in